Mystery and murder focus during January

The year started off with calls and online reports about a number of high-profile incidents, including the death of a woman in the South Parklands, the murder of a man late last year at Para Vista drug house, the bashing murder of Elizabeth South man Mark Boyce and the disappearance and presumed murder of Rhianna Barreau (pictured below) in 1992.

In total, Crime Stoppers SA received more than 2000 calls from people and 381 reports submitted using the website or Report Suspicious Behaviour app during the month.

People provided valuable information about an indecent assault at the University of Adelaide, an aggravated robbery in North Adelaide, arson attacks on the Nangwarry Football Club and the Smithfield Plains High School, and fatal crashes at Salisbury and on the Coorong.

Information from the community led to 42 apprehensions during January, including 13 men and 2 women charged with a range of serious drug and other offences.

We continued our support of the national Dob in a Dealer campaign, asking people living along the Limestone Coast to provide information about anyone making or dealing drugs.

Our first weekly crime segment on 9News Adelaide for the year reminded people to look out for bushfire arsonists during the Fire Danger Season.

Watch these and other weekly crime segments at https://www.youtube.com/user/SIBSACrimeStoppers

If you have any information about criminal activity and unsolved crimes, then don’t forget that you can call our free hotline on 1800 333 000, go to crimestopperssa.com.au or download the free Report Suspicious Behaviour app for iOS and Android phones.

Don’t forget that rewards are available and you can remain anonymous – it’s your choice. 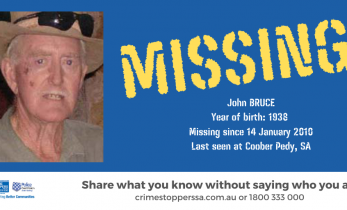