A husband and wife wanted for drug trafficking, a man accused of murdering his brother earlier this year, and a Queensland man on arrest warrant for a double murder in 1991 are among 18 fugitives wanted across the nation.

Crime Stoppers SA Chair, Ms Sharon Hanlon, said this year’s Operation Roam – Rogue Radar was focussed on criminals wanted for a range of serious crimes who continue to actively fly under the radar to avoid arrest.

“This is a national initiative developed by Crime Stoppers in partnership with police to encourage the community to provide information about wanted people who are on the run and likely to be moving between states. Some of these targets are suspected of serious crimes such as murder, assault, armed robbery and drug trafficking,” Ms Hanlon said.

“We urge people to provide information – no matter how small – about these fugitives by calling the Crime Stoppers toll-free 1800 333 000 hotline, visiting www.crimestopperssa.com.au or using the reporting app,” she said.

“All of our targets are actively avoiding police, which means any of them could be living in South Australia to stay under the radar to escape arrest. If anyone sees any of the targeted fugitives they should call 000 immediately, and a reward of up to $1,000 may be eligible for tips that lead to the arrest of any wanted person,” Ms Hanlon said.

“Last year’s campaign demonstrated the power of people, with both SA targets successfully located and arrested thanks to information provided by the community.”

With an average of 25 crimes solved every week and more than 30,000 crimes solved since it began 20 years ago as a direct result of information provided to Crime Stoppers SA, this is a highly effective program that clearly has the trust of the community and makes South Australia a far safer place.

Many of these targets are wanted for a range of serious offences, so people should NOT approach them under any circumstances.

For a full list of Operation Roam – Rogue Radar targets go to www.crimestoppers.com.au 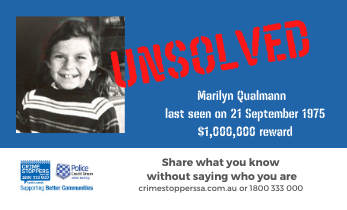