State Government funding of Crime Stoppers SA is already paying dividends following the discovery of one of South Australia’s largest-ever cannabis crops worth millions of dollars.

In the latest breakthrough, Crime Stoppers SA provided crucial information about a sophisticated drug operation to SAPOL, arming Northern District Detectives with cause to raid a Nemesis Court property at Buckland Park just before 8am on Tuesday 29 December.

Cannabis plants – ranging from small to large in size – were found growing in a number of glasshouses. Others were being developed hydroponically and a significant amount of cannabis was found drying on racks.

Police made eight arrests after people tried to flee the compound.

Detectives expect to uncover more than 10,000 plants during further searches and will remain at the property for numerous days to burn and dispose of the drugs.

“This incredible work by Crime Stoppers and SAPOL has sent millions of dollars’ worth of cannabis up in smoke,” Minister for Police Vincent Tarzia said.

“A tip to Crime Stoppers was critical in supporting SAPOL to stop drugs from hitting our streets and causing harm to South Australians. The scumbags behind this drug operation can kiss their profits goodbye.

“The Marshall Government is the first South Australian Government to directly fund Crime Stoppers and the more than $800,000 indexed over four years from the 2020/21 State Budget is already disrupting major criminal activity.

“This Government, Crime Stoppers and SAPOL will continue to work relentlessly to make South Australia safe, strong and drug free.”

“This major drug bust demonstrates that when someone shares what they know with Crime Stoppers to be passed to police, it can make a big difference and help disrupt the local drug industry,” Ms Hanlon said.

“Drug dealers are often hiding in plain sight – and we encourage people to step up and share what they know with Crime Stoppers without needing to say who they are or get involved.

“Every second call or online report to Crime Stoppers continues to be about drugs in the community, which demonstrates the public’s concern about the damage that drug dealers and manufacturers cause.”

Crime Stoppers SA has supported SAPOL since 1996 and provides information that has so far helped solve more than 34,000 crimes.

If you have information about an unsolved crime or suspicious behaviour, contact Crime Stoppers on 1800 333 000 or make a report online at www.crimestoppers.com.au 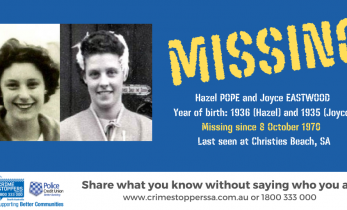 On 8 October 1970, Hazel POPE picked up her work colleague Joyce EASTWOOD from home, along with her two sons,…